A Bike Blog About Driving


Five months ago, I gave my car to my daughter, thinking I’d have a short experiment in car-free living. Because I was embarking on shoulder surgery, I knew I wouldn’t be able to drive for up to two months anyway. I figured that, by the time I was recovered, she would have registered the car, sent back my coveted YOGINI vanity plates, and I’d shop for a new Prius. It didn’t work out that way.

For a plethora of reasons, daughter is still wandering the country, too rootless to establish a residence, and I’m still paying the insurance. But I’ve adapted to my car-free life. As I watch my friends and family growing older (and, of course, as I watch myself doing the same), I’m more convinced than ever that remaining physically active is the key to successful aging. Not having a car forces me to be active, even when I don’t feel like it. And it’s easier now than it was during the long winter. The nice weather and the April “30 days of biking” challenge (27 down…3 to go) have given me plenty of motivation to ride.

But the time had come when I had to borrow a car. My dogs were in desperate need of grooming, and the mobile dog groomer who comes to your home charges almost twice what I’ve been paying. Borrowing a car seemed like a better option.

So I drove today for the first time in five months. If I’m going to drive, even occasionally, I shouldn’t wait so long. It was a bit terrifying and I felt like a novice driver. I got used to it fairly quickly, but having the car took me back to how I used to often spend a Saturday: driving around through congested areas to shop at crowded stores, and carry heavy packages. And – ugh – how unpleasant…especially on one a lovely Spring day.

But I wanted to take advantage of the car to pick up some heavy things at Costco [3-liter olive oil, gigantic white vinegar (my cleaning product of choice), canned tomatoes, multi-pack of tissues]. Since I was at the Costco mall, I stopped in to Marshalls for a new dog bed and cushions for my screened porch furniture. I then drove to Trader Joe’s and stocked up on dog food and to Ayers – the local hardware store – for potting soil. It took the better part of the day, and then I spent what felt like an hour hauling all the big bags into the house. Wouldn’t you know: the ONE day I had a car, my neighbors were having a party and I had to park way down the street.

After I picked up the dogs, I was half way to Great Falls and thought I’d drive them out there for a nice walk. The line of cars waiting to get into the park was so long I gave up and just came home – a total waste of about 40 minutes.

So here’s what I learned. I can buy one bag of dog food at a time, and get my olive oil by the single liter at TJ’s. When I use my bike, I shop closer to home, in areas that aren’t horribly congested. I might not bike as far as Great Falls, but – if I had – I could have zipped right past the line of idling cars. Who knows, maybe I’ll invest in a dog trailer for the bike!

After removing my rear rack last month to accommodate my new Burley Travoy trailer, I decided to get a front basket for those days when I have just a few things to carry and don’t want to use a backpack. I was in the neighborhood of Revolution Bikes and they had a black wire basket that I thought would look good on my (also black) Trek. Ah, but I hadn’t done my homework. If I had, I would have realized that a somewhat heavy basket that attached to the handlebars would create problems.


But, as I said, I hadn’t done my homework. Before I even left the shop with the cute basket attached, I discovered that its weight pulled the front wheel over to the side, making it impossible to park the bike with the kickstand. Once I hopped on and started riding, the steering became so cumbersome that I quickly developed tension in my arms and wrists, just from trying to keep the bike steady.


I made it to my destination, and thought there was a good chance I would never use the basket again. It felt like my bike had grown a set of big boobs that pulled its lovely balance all out of alignment. I hadn’t appreciated just how sleek the bike was without the basket. I had taken for granted how seamlessly I could steer the light bike, woman and cycle feeling like one continuous being. Never having had big boobs myself, I felt a moment of compassion for all those women who have to trudge around with a big heavy front rack, giving them backaches.


So, the basket spent a few weeks in the closet. Last week I decided to give it another try. I still don’t like how it feels, but I was able to manage my ride without the arm and wrist tension. However, I learned that a front basket should attach to the bike post, not the handlebars and, at some point, I will probably get a replacement. At least the basket I got is a quick-release model, so I can attach it only when I really want to use it.


Since I’m on the topic of boobs, I’ll say this: everyone has been talking cherry blossoms, cherry blossoms, cherry blossoms. So yesterday I decided to swing by the Tidal Basin on my way to other errands. The blossoms were a bust! It was way too early. Only a few trees were really blooming, but the tourists were swarming everywhere. There was a large area set up for bike parking. Of course, I was delighted to see that. 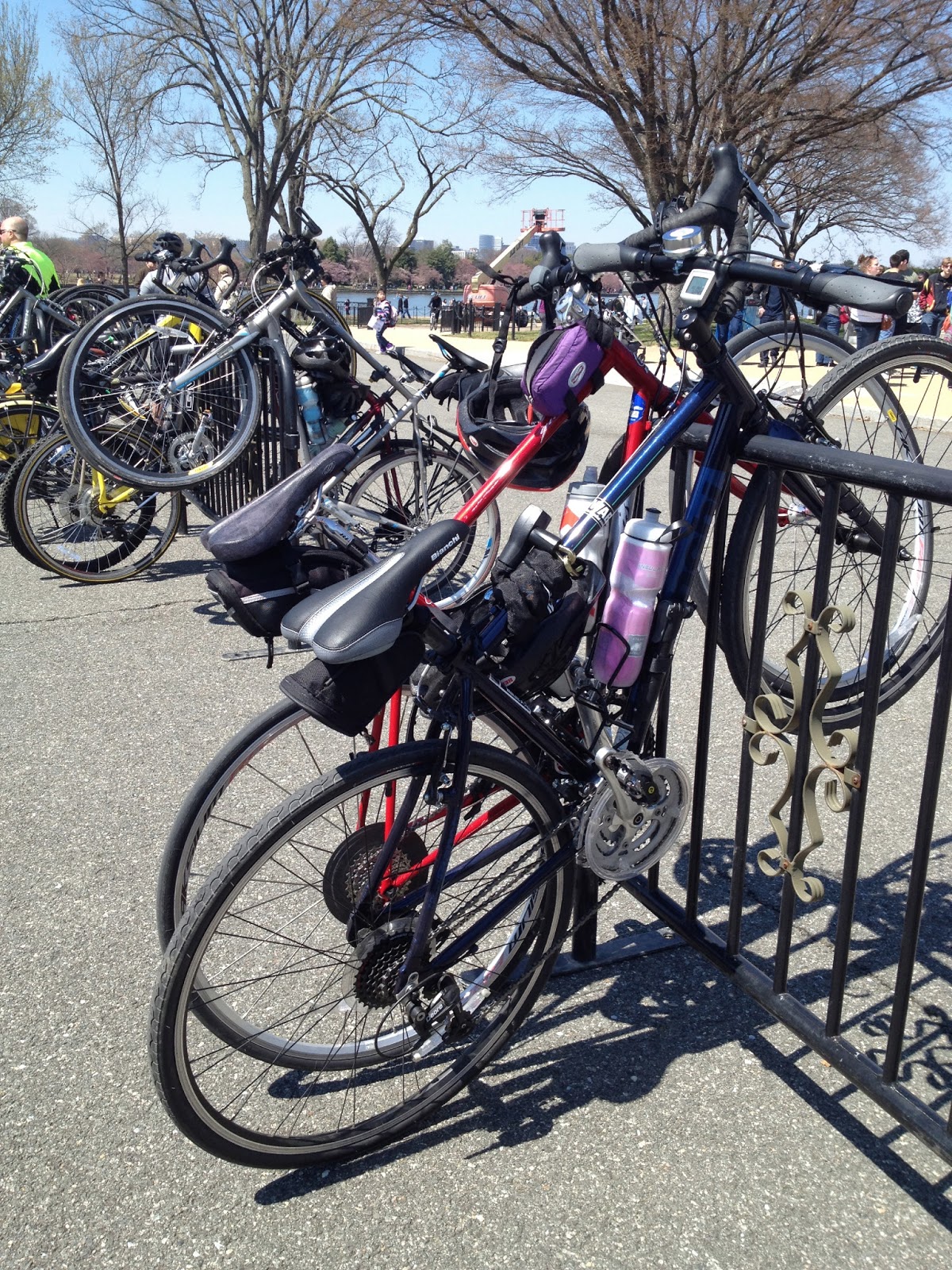 But when I went to lock up my bike it became clear that the bike parking was not composed of real bike racks. After looking more closely, I saw that they were in fact “barricades,” presumably of the type used for crowd control. As my photos show, they were poorly suited for actually locking up one’s bike. Sigh…we take what we can get. 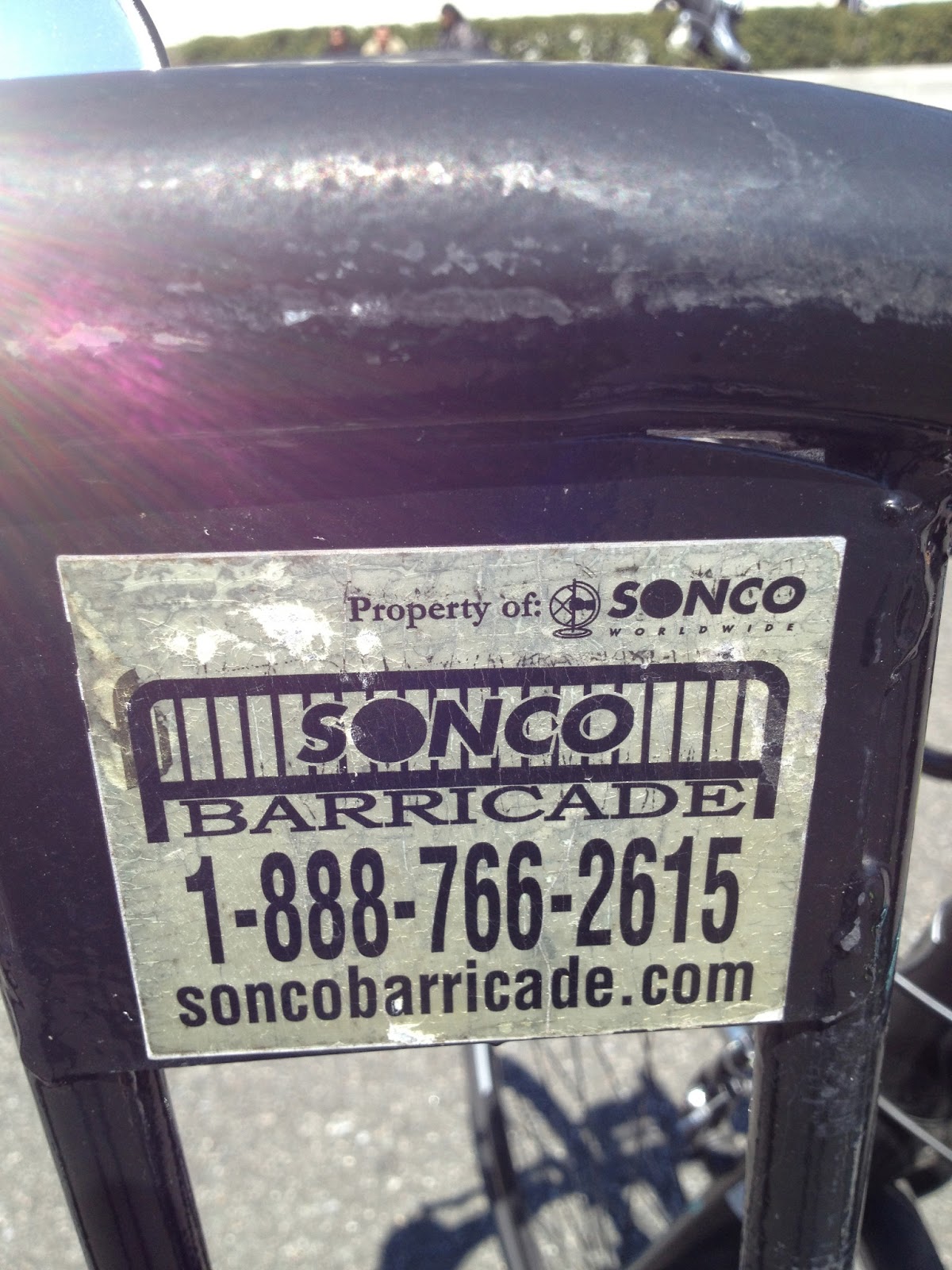 Leaving the mob scene, however, I couldn’t have been happier to be on a bike. Car traffic was at a tangled standstill, with the accompanying horn honking and looks of frustration on the faces of the passengers. I did have a nice interaction with a taxi driver, who asked if I’d give him a ride. I joked back, sure, hitch your car up to the back of my bike and I’ll pull you! But, of course, I left him in the dust. There were lots of pedicabs working and it was a lovely sunny day for sharing smiles with fellow cyclists.


A young man and I were both loading our bikes onto the Metro elevator at Dupont Circle and, surprise, we both got off at Friendship Heights, again sharing the elevator. We chatted about what we were off to and he said, “Maybe I’ll see you on the way back.” This is one of the things I love about being part of the bike culture of my city. Here I am, a 60-year-old woman, and I get smiles and knowing head bobs from cute young men, athletic young women, as well as other “mature” cyclists like myself. We’re all in it together. We share that glorious sensation of moving unencumbered, on your own power, feeling free and alive.


Today the weather was even lovelier, and I used my Travoy to take advantage of the trip chaining for which it is so perfectly designed. I rode to yoga, and taught my two Sunday morning classes - the beginning of a new session. From there, I took the Travoy to Safeway (a block away) and picked up a few things I like there. Then I rode to India A-1 grocery, stocking up on ginger, veggies, roti, and some super-spicy channa (roasted chick peas). A few blocks later, I made it to the Heidelberg Bakery, just before they closed, getting their last loaf of multi-grain bread. With my trailer bag full and heavy, I appreciated that the rest of the trip home was mostly downhill.


Last note of the day – I received my errandonnee patch in yesterday’s mail, and ironed it onto the Travoy’s tote bag. Since the bag is made for doing errands, I thought it most worthy of displaying the gold star. 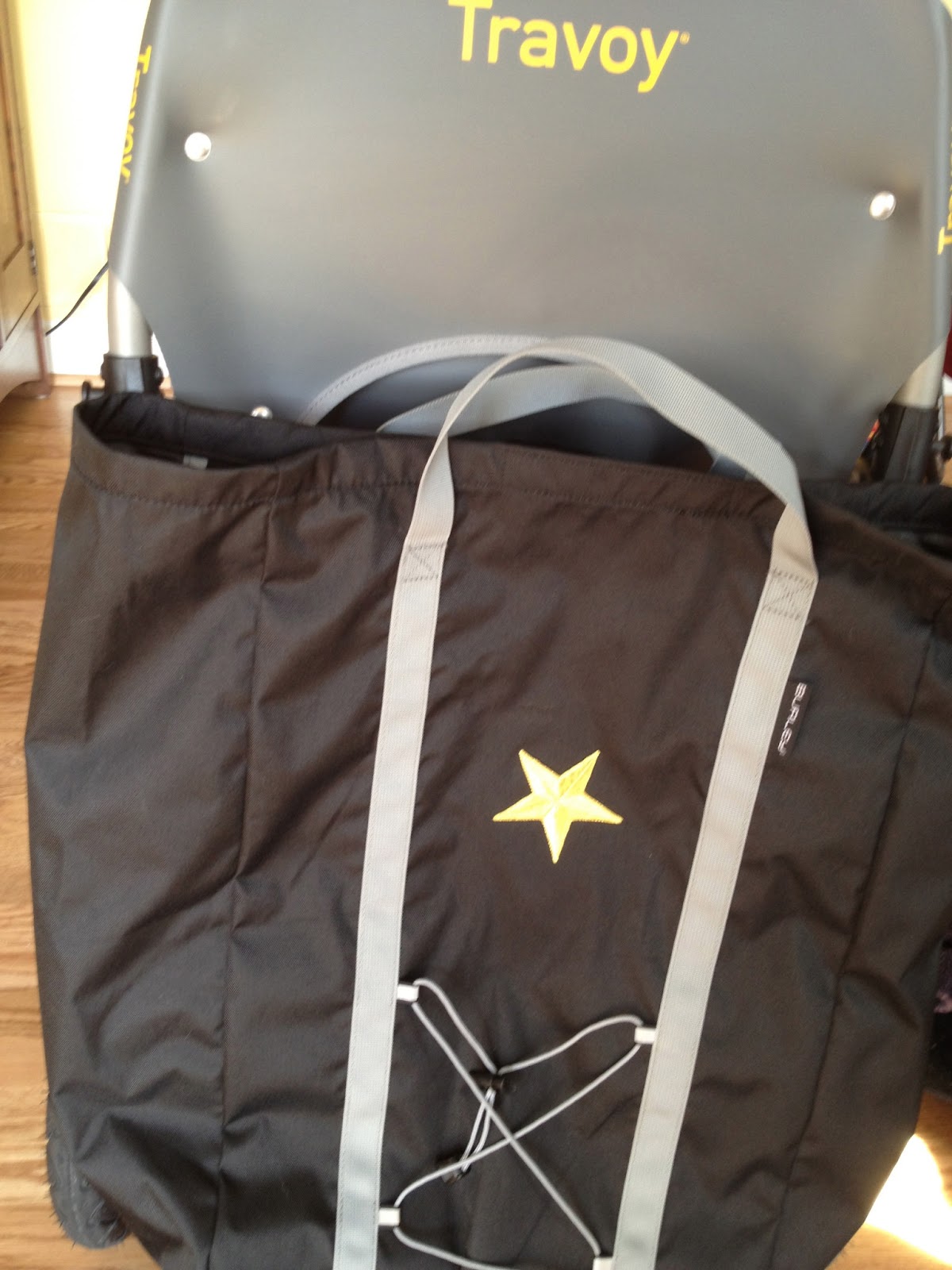 Posted by Biking Yogini at 3:58 PM No comments: