Taking the Long Way: the 2016 Errandonnee

If you ever want to find me I can still be found, taking the long way around… (Dixie Chicks)

That’s my approach to the 2016 Errandonnee. Now that I’m retired, I have more time to do errands at a relaxed pace. My only “work” is teaching yoga on Sunday mornings – just 2.5 miles from home. I used to ride 10 miles to my office about 3 days a week but now I find myself looking for excuses to take longer rides. Not that I need excuses; like all good things, the bike ride is its own reward. Nevertheless, taking a yoga class in DC instead of staying in Arlington gives me a 20-mile bike ride; going to Trader Joe’s for my groceries is farther than my local supermarket, but it’s a nice bike-friendly ride.

This year I briefly considered trying to do the entire Errandonnee in one day, but the scheduling logistics were too daunting. Besides, the challenge happened to coincide with gorgeous Spring weather and I knew I would want to be on my bike nearly every day.

It’s interesting for me to watch my evolution as a cyclist. For most of my life I was a recreational rider, primarily using the bike path on weekends for exercise. Then I met the Cycling Yogi – a long-time transportation cyclist – in 2009. Eager to hit it off with my new love interest, I started biking all over Philly with him. In 2010, a bike commuting coworker taught me the route from my Arlington home to downtown DC and I impressed myself by becoming a sometimes bike commuter in my late 50s. At first, like many female riders, I would take a longer route to stay on designated bike paths. But, with more experience, I started using the shortest route – a practice that was supported by the concomitant development of extensive bike lanes in both Arlington and DC. Still, if I could avoid a hill by taking a longer route, I avoided the hill. But after joining the Bicycle Space “Hills of Rock Creek Park” ride last year, I added a new challenge: deliberately adding a hilly ride once a week. Add retirement to the mix and I now find myself inventing reasons to take a 17-mile or longer ride. So what could please me more than the Errandonnee challenge – an opportunity to do at least 12 errands by bike in 12 days, for a total of 30+ miles in at least 7 of 9 categories?

Here’s what I did:

I like the multigrain German-style breads at Heidelberg and it is right on my route to the yoga studio. However, if I want a chance to get the bread of my choice on a Sunday morning, I have to go before yoga. There were many St. Patrick’s Day goodies to be had at the bakery, but I resisted – even though I recently found out that I’m 1% Irish.

It doesn’t feel like “work” but I do teach yoga every Sunday morning. Late winter/early spring is pothole season, and I had to be very careful to avoid some big ones between the bakery and yoga.

This was my first of my “taking the long way” trips. The day had started a bit chilly, but by noon it was perfect riding weather – around 60 degrees. Although I could have returned my library items a few blocks from the yoga studio and headed home, instead I rode to Shirlington – adding about 9 miles more than “necessary.” Shirlington is a very dog-friendly village and many were out enjoying the day.

Another excuse to take the long way. I like to ride the 17-mile “Arlington Loop” once a month or so, usually stopping at Shirlington (12 miles into the ride) for a little break. I had a lovely espresso, proudly displaying my backpack with the awesome Coffeeneuring patch from last season. On the way there I saw a graceful pair of mallard ducks in the pond along the Custis Trail and many, many robins, especially along the W&OD trail on my way home.

As I made my way toward home from Shirlington there was a great flurry of fire trucks zooming past. I stopped into the Goodwill store hoping (unsuccessfully) to find some cheap plastic food storage containers. All the police activity was going on right at the intersection of Columbia Pike and the bike path. Although I didn’t find what I was looking for, I discovered a small gift for a cousin and a very nice dress. I was, as usual, glad to be a on a bike, as traffic was blocked off on Columbia Pike – making a huge pile-up.

This was a good day for trip chaining…planning out the best way to sequence four activities. First stop was the post office, where I took my bike right into the lobby to use the self-service machine. I sent the gift to my cousin.

Next stop: my weekly Feldenkrais class – a gentle, therapeutic movement modality – otherwise known as rolling around on the floor and relaxing! I noticed how easily I can always lock up my bike outside the yoga studio…a place I park with great regularity.

I had a check to deposit and still use the ATM, which I enjoy riding up to on my bike. The idea of depositing checks with my phone is still scary to me.

Down the road and across the street I stopped to stock up on some of the spices I’d depleted, since I had spent part of the morning making a fresh batch of curry powder and a roasted spice blend called bese bele. I was annoyed by all the road construction signs that were blocking the sidewalk. Yes, I know that it’s not good to ride on the sidewalk, but for this one stretch of my ride I have to travel on Lee Highway. I will ride in the road on early mornings when traffic is light, but not during the day when it is very trafficky.

After a brief rest at home, I cooked food to take to a friend whose husband is very ill. This is the reason I was looking for more food storage containers…I’ve been using mine up. She lives conveniently off the W&OD Trail and I discovered a new link from her house to the path on my way home. 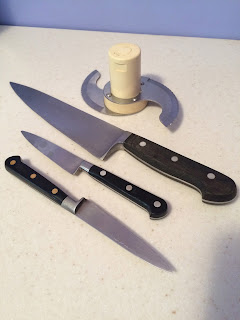 It was long overdue – my trusty old chef’s knives had not been professionally sharpened in many years. Some time ago I discovered DCSharp at Union Market, but found out there would be a 4-hour wait when I hauled the knives in on a weekend. So on a quiet Thursday afternoon, I carefully packaged them up and headed over on my bike.


They were taken care of in less than an hour while I enjoyed kale slaw with tofu and Brussels sprouts from TaKorean. I noticed that the market was much closer to Union Station than I’d realized and there were many people enjoying the sunny day. 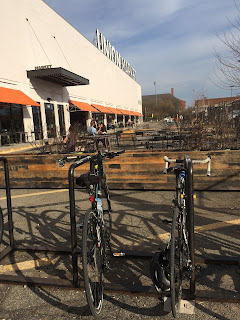 True Confession – I just binge-watched Season 4 of House ofCards in less than a week – gobbling up 5 episodes the first night. I love the opening montage and was intrigued by the shot of a liquor store with the street sign reading 1600 North Capital Street. It was on my way to my next destination, so I decided to swing by, take a picture, and verify that it was a real DC location.

I was meeting a friend before heading to another event (below) and was able to go straight across R St: a flat, direct shot – but one with very rough pavement, lots of traffic, and many long stop lights. But – it was bike lane the whole way (even if the bike lane had the roughest pavement). 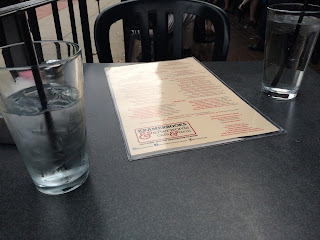 
Since I didn’t do the entire errandonnee in a single day, I decided I would be sure to use every category this year. So, for my last entry, my friend and I went to a poetry reading sponsored by the Folger Shakespeare Library: an annual event in which the selected poets (Mark Doty and AimeeNezhukumatathil, this year) compose or choose poems of their own paired to works of art in the gallery.


This year the theme was nature. It was a delightful event from which I rode to the Farragut metro, and then home. As I packed my lights at the beginning of my trip, I remembered the days when the errandonnee required two trips in the dark. I don’t miss that requirement, but I like knowing that I am now a veteran of four errandonnee challenges!

Posted by Biking Yogini at 7:53 AM No comments: