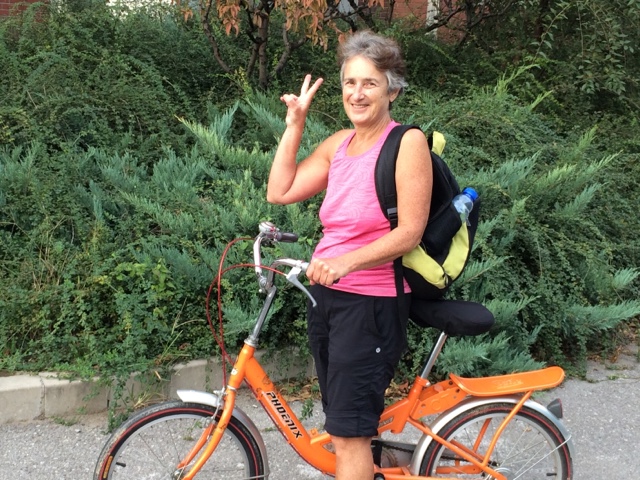 We Westerners may remember the Beijing of old in which the streets swarmed with bicycles and few people drove cars. And although Beijing now places strict limits on automobile ownership (one must have a permit to purchase a car and there are long waits) cars rule the roads, as is true most places. More common than cars are electric motor scooters and, as the middle class in China continues to grow, these have become widely available. So here’s what happens: as cars and buses clog the roads, slower-moving motor scooters use the bike lanes, making cycling somewhat hazardous. Bikes (and motor scooters) move onto sidewalks (when sidewalks are even available), leaving the poor pedestrian little space to safely navigate. Despite the wide prevalence of walking, pedestrians are probably the least-safe travelers – often having no choice but to walk in the roads with bikes, scooters, cars, and exhaust-belching buses.

These problems are compounded by a dearth of traffic signals and a nearly universal disregard for the signals that do exist. Cars and scooters beep their horns to warn the bicyclist and pedestrian, “I’m coming, I’m not going to stop, and you’d best get out of my way!” Admittedly I’ve only been in China a few weeks, but I have yet to experience an instance of a motor vehicle yielding to a pedestrian – either in urban Beijing or Guilin or even in smaller villages in the south.

Many Beijing cyclists use electric-assist bikes, allowing them to move faster than traditional bikes. Although Beijing is very flat, perhaps people travel far distances, as this city sprawls for many miles. I’ve been staying on the northwestern outskirts of the city (if you look on the Beijing subway map, my stop is Life Sciences Park on the pink line). Getting to central Beijing, even on the very efficient subway system, takes at least an hour and often involves as many as five trains, depending on my destination. While traveling above ground I pass miles and miles of new development – huge apartment and office buildings springing up everywhere.

Yet it’s only when one is close to the ground that one can truly experience the juxtaposition of the old and new Chinas. Clean modern buildings and shopping malls featuring a full capitalist consumer extravaganza rub shoulders with old-style shops, narrow lanes, and less-than-savory sanitation practices. If I travel on foot between the modern office building where The Cycling Yogi is working to the subway (a mile by road, slightly less by footpath) the route takes me through a dirt path to a crossing of two sets of RR tracks, the other side of which is a narrow, trash-strewn lane. A small village of tiny shops, eateries, and street-food sellers fills several square blocks. Between this remnant of “old” China and the subway is a modern shopping mall which includes a Starbucks and array of stores, many of which are indistinguishable from those in any American city (aside from the language on the price tags).

Very few bikes here are fancy. Most look old and well-worn. Old-style tricycles (I think of them as truck-cycles), built to haul large loads, abound and they move quite slowly. Street sweepers move about on these cycles, and use brooms made of branches to clean the streets. Children ride on the back of bikes or on little seats in front. People cycle while holding an umbrella in one hand. Many bikes are equipped with rain covers to protect bike and rider from the elements.

I was fortunate to be able to borrow a bike from The Cycling Yogi’s work colleague - the gracious and incomparable Meng-Qiu - who has helped in every way possible (even giving me the shoes off her feet). I have enjoyed riding her adorable orange cycle with pedals shaped like flowers. Its one gear is perfectly adequate for the flat terrain. As my feet have suffered from enormous blisters (the result of a week of mountain hiking in the heat) and an aggravated bunion, being able to navigate between The Cycling Yogi’s apartment, office, and other locations by bike has given my feet time to heal before my next adventure.

Posted by Biking Yogini at 4:29 AM No comments: