2017 Errandonnee - A Tale of Three Cities

After the warmest February ever, with weeks in the 60s and 70s, it was a shock to have snow and ice in March. So when the Errandonnee started with a few temperate days, I hastened to complete bicycle errands whilst the weather was favorable.

In a classic trip chaining scheme, I planned a route with many errands in a 10-mile loop. From my home in Arlington’s Westover area I rode to George Mason and Lee Highway for the post office and bank; then along 22nd St and Lee Highway to the yoga studio. From there I took Quincy St to the central library and then along Fairfax and Clarendon Blvd. to Trader Joe’s. I returned along Wilson to the Ballston Sport & Health, looping around to the Glebe Rd entrance to park my bike. I then took Glebe Rd to the entrance to the Custis Trail, where I exit on John Marshall Dr. I like the challenge of working out the most efficient route!

#1 – personal business – stopped at the post office to mail a letter. 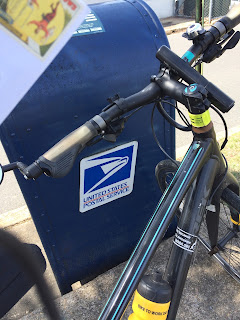 #2 – non-store errand – stopped at the bank to deposit money in my daughter’s account. 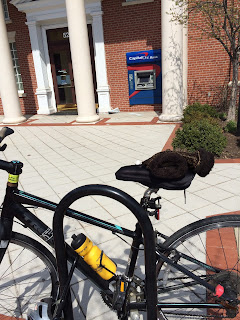 #3 – “work” – I wasn’t working, but I stopped at my place of work – Sun and Moon Yoga Studio – to drop off checks for my substitute teachers – one for the previous week when I was sick; the other for the coming week when I had travel plans. 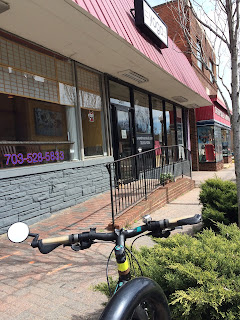 #4 – non-store errand – stopped at Central library to return DVDs that occupied me while I was home sick for a week. 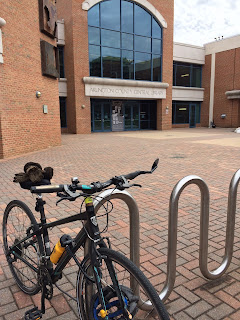 #5 – store – went to Trader Joe’s for sauerkraut in my attempt to eat fermented foods daily. 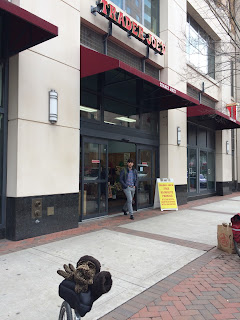 #6 – personal care – stopped at the gym and lifted weights, but was disappointed that the steam room was out of order. Forgot to take a photo, so here is a link to Sport & Health.

#7 – arts and entertainment – rode to Courthouse to see Get Out. Definitely worth the 9-mile ride. 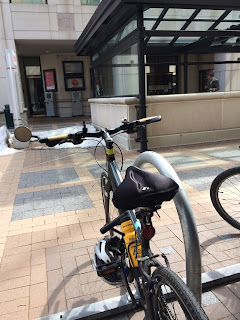 #8 – personal care – Drove up to Philly on Thursday, so Friday morning took the tandem with the Cycling Yogi to Magu Yoga for class (2 miles round trip). Forgot to take a photo, but am including a link to the studio, where I had a great class to get out the kinks from my car trip. That afternoon took the train up to NY to see the Paul Taylor company and spent the night at my friend Sarah’s house in Brooklyn.

#9 – social – In Brooklyn, Sarah and I rode from her apartment near the Cortelyou subway stop to Coney Island – my first visit there – 10.5 miles round trip. I borrowed her partner Kevin’s bike, which I found to be supremely comfortable. The illusion of me standing on my bike seat was unintentional, but quickly noticed on Facebook by an astute Coffeeneur! Took the train back to Philly that afternoon. 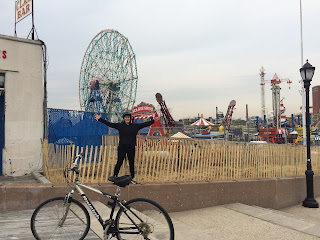 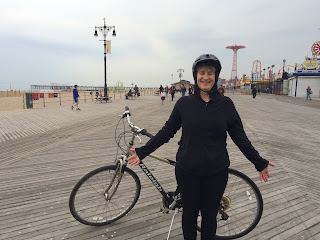 #10 – wild card – When my daughter moved to Philly she took over use of my Philly bike. The Cycling Yogi had the good fortune to win a bike in a raffle, but I had never ridden it. It is really a bit too large for me and has drop handlebars, which I never use. They make me nervous! So I totally miscalculated how long it would take me to ride from Mt. Airy to Center City. My hands were cramping because the reach of the brakes was really too much and the ride into Center City is predominantly downhill – something I enjoy under normal circumstances, but was a bit hair-raising on an unfamiliar bike. Long story short – plans had to be adjusted because it took me so long. So I found a nice coffee shop (a little Coffeeneuring scouting) and had an espresso and a snack while waiting to meet my daughter for a later movie than we’d originally planned. 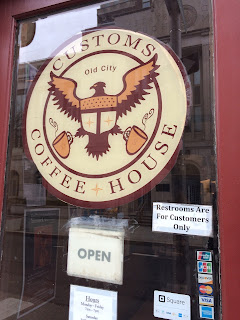 #11 – arts and entertainment – Had parked the bike by the movie theater where I met my daughter to see I am Not Your Negro (11 miles for the ride). From there we walked about a mile and had dinner, then stopped at the Philly AIDS thrift store. Then we headed on foot for Jefferson Station where she could get the trolley home and I dashed to the SEPTA without a second to spare to take the bike back by rail. On the newer SEPTA trains there are long seats that flip up and bikes can be easily stored. There is even a seat belt to hold the bike in place! 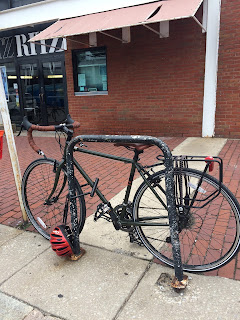 #12 – personal business – After driving home from Philly that morning, I decided to take a walk trip to complete the Errandonnee, giving my dogs a chance to finally get in on the act. We walked just over a mile (round trip) to the Westover library, where I had Lisa See’s new novel on hold and then to the post office to mail in my taxes. It was 68 degrees and sunny, making me believe that Spring is here to stay. 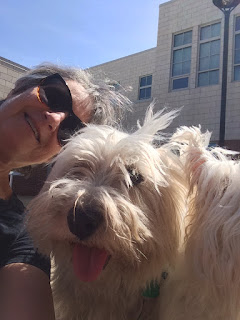 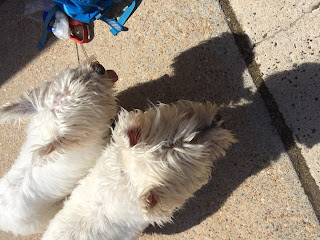 So – I had a grand total of about 42.5 miles biking (using 4 different bikes) and 2 miles walking. With good weather and trips planned for the rest of the week, I’m certain there will be more bike errands to come, but this concludes my official 2017 entry.
Posted by Biking Yogini at 9:23 AM No comments: