The beginning of autumn generally signals prime biking season, with cooler temperatures and clear skies. So it’s no wonder that this week was filled with bike activity.

On Monday I had signed up to help build bikes for DC school children. “Build” would be an overstatement of my abilities, but I was assured that no technical skills would be needed. Organized by Revolution Cycles in Arlington, I rode in still-darkness to arrive at the shop by 7 a.m., in time to be transported by van with other volunteers and Revolution staff to the D.C. Public Schools surplus equipment warehouse in NE Washington.

It turns out I need not have worried about technical skills. The big job for Monday was getting 400 balance bikes out of their boxes and removing the Styrofoam and so forth, then breaking down the boxes for recycling. The somewhat more skilled among us greased the seat stems and did a few other very minor assembly tasks. The unskilled like myself then transported the finished bikes to a remote area of the warehouse – which took more time that one might imagine. The most skilled volunteers actually assembled 16” and 20” bikes – about 150 of them, in addition to the 400 balance bikes.

Although it was a beautifully cool day outdoors, the inside of the warehouse was steamy and the large fans that made the temperatures just barely tolerable were painfully loud. But the camaraderie of the volunteers made up for these hardships. That said, I learned that I am not cut out for assembly line work. The repetitive hand movements and lifting, lifting, lifting of the small bikes put quite a strain on my aging body.

Still, I’m glad I helped, since all kids should get a chance to learn to ride a bike!

Tuesday I had taken the “car-free day pledge.” I felt like a bit of a cheater, since many of my days, maybe most of my days, are car-free. Also – I was fortunate with the weather, which was clear and crisp. With my trailer I rode to the pick-up spot for my weekly share of vegetables fresh from the farm. It’s just over two miles and I have picked them up by bike nearly every week this season. After taking them home to unload, I rode to the yoga studio for my weekly treat of a gentle Feldenkrais class. Aside from walking the dogs in the morning, those were my only trips of the day.

Wednesday was the Jewish Day of Atonement, or, as the Cycling Yogi has led me to think of it, at-one-ment. I don’t participate in organized services of any kind, but I do believe in having a day for fasting and contemplation. I dropped my dogs at the groomer and headed out to GreatFalls, where I spent the morning walking and enjoying the beauty of rushing river, falling leaf, and ancient rock. I stopped at a farm market on the way back and got pots of mums for my front yard and bright, cut flowers for my living room. The autumnal shades of red, gold, and orange lift my heart and there is something about the tangy scent of marigolds that I find immensely pleasant. 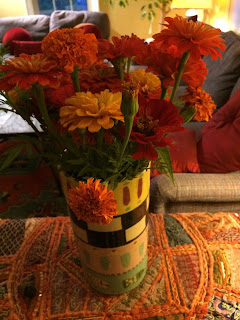 Thursday I planned a big biking circuit. I rode over Chain Bridge to the Capital Crescent Trail, which I took to Dorset Street. This put me a short distance from my dentist’s office, where I was scheduled for a cleaning. I happened to glance at the Washington Post while I was waiting and saw an article about the DC plan to have all second graders learn to ride bikes. There were photos of some of the larger bikes the volunteers assembled this week.

I had planned a few errands in NW Washington – but unfortunately had not checked the public library’s hours. They don’t open until 1 p.m. on Thursdays – so I was unable to procure the book I wanted. I rambled around a bit and picked up a carryout lunch, which I then took to the grounds of the Levine School of Music where I take a singing class. I enjoyed lunch in the shade of a tree. After class, I returned home via Rock Creek Park, which I am getting more familiar with. My circuit totaled 21 miles, which felt like a good day’s ride. The weather stayed mercifully cool.

So fall already has ushered in many happy pedaling miles. Stay tuned, as the official coffeeneuring season is about to kick off next weekend.
Posted by Biking Yogini at 2:42 PM No comments:

Confessions of a Hill Avoider

Give me some credit – as a self-avowed hill avoider, it took some nerve to show up on a Sunday morning for DC Bicycle Space’s “Hills of Rock Creek Park” ride. I ordinarily teach yoga on Sunday mornings but the studio was closed for Labor Day weekend. And, the first weekend of the month is advertised as a “beginners” ride: slower pace (10-12 mph compared to 14-15) and not quite as many hills. Add to the mix a wonderfully cool morning and I knew it was then or never for me to tackle the Rock Creek ride.

A group of about 15 cyclists gathered at 8:00 a.m. at Bicycle Space’s new location on 18th Street in Adams Morgan – and about 4 or 5 of us were first time group riders so I didn’t feel too awkward and alone. I lived in Adams Morgan from the mid-1970s to mid-1980s and used to cycle in Rock Creek Park. Now that I live in Northern Virginia I never do any more – in part because the paths aren’t in the greatest repair, but mostly – I’ve just gotten out of the habit. So it was nice to get back into the park with its shade and with the help of a group leader who had planned out a rigorous hill ride for our “pleasure.”

I have a notoriously poor sense of direction, so it was nice to be able to just follow along without the tinge of getting-lost-anxiety I often have when riding solo (with good reason…readers of this blog may recall my mishaps a few years ago in the Twin Cities). So over hill and dale we rode. It quickly became apparent that I was destined to always be the last one up the hills. Our sensitive and adept group leader – Chris - asked one of the other riders to take the rear – ensuring I didn’t get left behind.

Eric was a good companion for me. He had done the Rock Creek ride the past three weekends. Plus, he commutes through the park from Takoma Park to Arlington every day. So he knew the park well and, I guess, didn’t feel any compulsion to prove himself by riding fast. He teaches astronomy and physics at Marymount University, so we had stimulating conversation between my huffs and puffs chugging up the hills.

At designated spots the group waited for us to catch up. I never once felt shamed for my slower pace and none of the riders acted the slightest bit impatient. From the beginning my front brake was making a funny sound. At our first bathroom stop one of the other riders pulled out a handy-dandy bike fixer gizmo and adjusted my misaligned brake in no time. Talk about full service! During the rest of the ride many of the other riders checked in with me to see how my brakes were doing. I enjoyed the friendliness of the group.

I would be at pains to tell you exactly where we went, but the far point of our ride was the Mormon Temple, which many locals refer to as “Oz.” Having just seen The Book of Mormon on Broadway this summer, it took great reserve for me not to not break out in the song “I Believe,” although I quoted one of its best lines (I believe that in 1978 God changed His mind about Black people) to one of my fellow riders. Hey – he brought up the topic of the show, so it seemed appropriate.

The entire ride came to 24 miles and I felt proud of myself for finishing without the humiliation of walking up a hill. Despite the supportiveness of the group, it was hard for me not to feel a little defensive about my slower pace. But I looked around and am pretty sure that I was the only rider older than 50 – much less over 60. So I felt deserved in my self-congratulations.

While I can rarely do a group ride on a Sunday morning, Bicycle Space leads a Hills of Anacostia ride on Saturday mornings. So – I’m a little sorry that the first weekend of October and November already are booked. No – I’m not ready for the non-beginner ride. But I’m marking my calendar for the first Saturday of December. Who knows – maybe one day I’ll actually go out of my way to find hills!
Posted by Biking Yogini at 10:54 AM 1 comment: