Why would people look for excuses to ride their bikes to coffee shops? As with so many questions in life, the answers may be unique for each of us “coffeeneurs.” For me, I enjoy the sense of community among people who love to ride bikes and have fun along the way. Making connections on Facebook has added a new component and the chance to see cyclists around the globe connecting.

When the weather is nice, most days I find a way to ride my bike somewhere. But the coffeeneuring challenge also helps me get out on the bike on a day that I might have been tempted to stay indoors. It just so happens that this autumn has offered us the best cycling weather I can remember – ever – but having the challenge motivates me to, perhaps, ride a little farther and treat myself with some good coffee and maybe even a cookie.

My earlier blog chronicled my first five “official” rides, as well as some “extra credit” rides that I, as a retired person, have lots of time for. Herewith – my last two “official” rides and a bonus at the end.

Some people call it the “Arlington Triangle.” I call it the Arlington Loop – a 17-mile journey connecting several of Arlington’s bike paths. What originally attracted me to the loop was the possibility of riding east on the Custis Trail – which is predominantly downhill – and then joining the Mt. Vernon Trail, connecting finally to the W&OD and Four-Mile Run trails for the mostly flat ride home. It was a glorious Saturday so I was happy to be riding. I planned to stop in Shirlington, which is about 12 miles into the ride for me, and gives me another excuse to take the loop in the more downhill direction.

There is plenty of bike parking in Shirlington and I generally park by the library. I had thought about going to Busboys and Poets for coffee and lunch, but the line was way too long! So I walked over to Best Buns, where I got a tasty espresso and a sandwich. I then picked up a book at the library and a few groceries that I could fit into my backpack and headed home. It’s always a little bonus to ride past the dog park at Four-Mile Run where the pooches romp in the water and make mayhem. 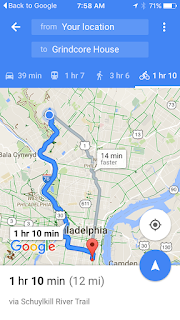 I look forward to coffeeneuring away from home and was glad that I planned to visit the Cycling Yogi in Philly for the week. Because I usually bike with him, I still haven’t learned all the ins and outs of getting on the bike paths from his Mt. Airy home to Center City. Fortunately, Google Maps will give me oral directions on my phone, so I headed out for a solo voyage. My goal was to find the vegan Grindcore House in south Philly. Of course, all coffee is vegan, but Grindcore features vegan snacks, as well as a low-key reading room. South Philly is hipster heaven, so naturally there was plenty of bike parking. 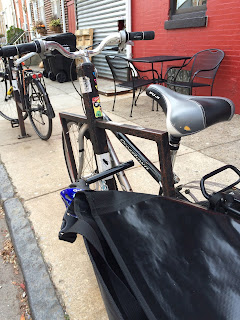 Once I found my way to the Wissahickon bike trail I know my way pretty well from it to the Schuylkill River trail and on toward Center City. There now is a nice new connector from the trail to South Street, including a bike trough up the stairs and a well marked green lane on South Street – at least for a few blocks. Unfortunately Google Maps then disappointed me – taking me along a mile and a half of Washington Avenue: a terrible street for cycling with lots of traffic and no bike lane.


This portion of the trip was 12 miles and I relaxed with an espresso and charged my phone, since the battery drains very quickly when using navigation. From there I wanted to try one of Philly’s many vegan restaurants for lunch. My original choice – Vegan Tree – ended up being closed on Tuesdays, so I rode to a hole-in-the-wall place just off Rittenhouse Square called HipCity Veg. This time I avoided Washington Avenue, taking the parallel, and much bike-friendlier Christian Street. At Hip City I got a yummy vegan fried chicken sandwich with pickles, BBQ sauce, and avocado. It didn’t quite match what you can get at DC’s Woodlands Vegan Bistro, but it hit the spot on a full day of cycling.

My last stop was at the Reading Terminal Market (a Philly institution and food extravaganza) where I picked up my favorite dried peaches and then headed back to Mt. Airy. Coming out of the Wissahickon park I faced the eternal question: why must the big-ass hill always come at the end of a ride? Total miles for the day: 25. Getting lost: 0…that in itself, cause for celebration!

These are my last two official coffeeneuring rides. However, I want to close with another bike adventure in Philly. My good friend Tamar is blessed with amazing parents who, for 20+ years put 28,000 miles on their tandem bike. Now in their 80s, she told me they had finally given up their tandem riding. Their well-used and much-loved bike was sitting forlornly in the garage. The Cycling Yogi and I had one bad experience on a cumbersome rental tandem some years earlier in San Francisco. But we still dreamed of making a tandem work for us.

We asked if Tamar’s parents would consider selling us the tandem. Being the big-hearted bike lovers they are, they declined cash but asked us to make a donation to the Rails to Trails Conservancy, which we were only too happy to do. We drove the half hour to their home in New Jersey on a rainy afternoon and managed to wrangle the tandem into the back of my Prius. We took it to Wissahickon Cyclery for a few minor adjustments and waited impatiently to be able to take it for a ride. 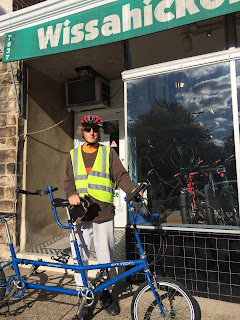 Friday afternoon it was ready and we headed out to the Schuylkill River Trail in the direction of Gettysburg. It was too late in the day to go all the way, but we rode as far as Norristown, a good 25 miles round trip – with only a few mishaps. Learning to ride in tandem will be featured in a future blog. 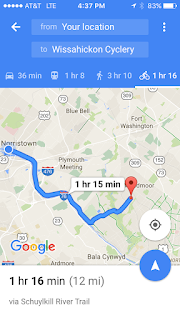 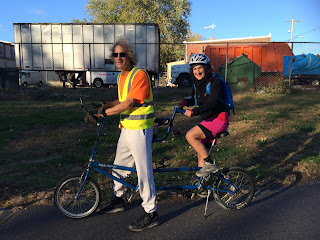